As the number of people experiencing homelessness increases, we speak to social impact business BEAM to hear about their crowdfunding, tech solution to this national crisis.

The latest figures from Shelter tell us that 320,000 people are recorded as homeless in the UK. And that they say is an under-estimate. This number is increasing by roughly 1,000 people per month and is an increase of 4% on previous years’ figures.

It’s always at this time of year when homelessness becomes more visible. As temperatures drop, we might begin to imagine how life would be without the comfort of our living rooms and radiators.

But, many of those experiencing homelessness in the UK go unseen and unheard. The ‘hidden homeless’ accounts for a large number of people who go under the radar of official statistics, yet they have no place to call home. Often living in temporary accommodation - sofa-surfing, sleeping in cars, sheds or public transport - and often with families to support.

I remember growing up and not being able to understand why some people could live in houses and others couldn’t. I still don’t get it. 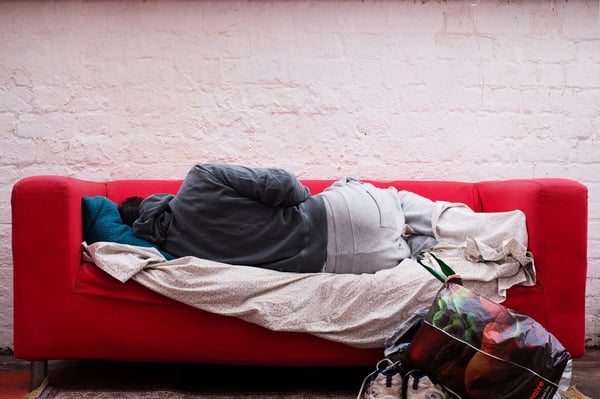 The harsh truth is that unexpected events in people’s lives lead to unexpected consequences; the loss of a loved one, the cycle of addiction, a severance of employment, or perhaps it’s the natural evolution of a society where rent increases are outstripping income.

Whatever the cause, homelessness is something that seems like it shouldn’t have a place in the modern world. Certainly not in the world's fifth largest economy. With all of our achievements, all our apps, hybrid cars and Amazon Echos, why is it that we still haven’t cracked this one?

The silver lining is that there are people out there working on it. People, who like most of us, have walked past a frail character, huddled in a damp corner and wanted to do more than fumble in our pockets for a some loose coins. People who want real change.

I was lucky enough to chat with one of these people a few weeks ago. Alex Stephany is the Founder and CEO of BEAM - a tech-for-good, social impact business on a mission to help people leave homelessness through training, support and stable employment.

In the last year Alex and his small team have developed a crowdfunding platform which connects potential supporters to homeless people (members) who are raising funds for training, qualifications and equipment to help them move into work. Alongside the tech, BEAM supports each individual with a case-worker (member manager) who maps out a tailored plan for each member. First they figure out what career path to head down and then they map out what they need to do to get there as well as how much it will cost to get there.

Each member then creates an individual crowdfunding page with the ultimate goal of funding their journey into employment. 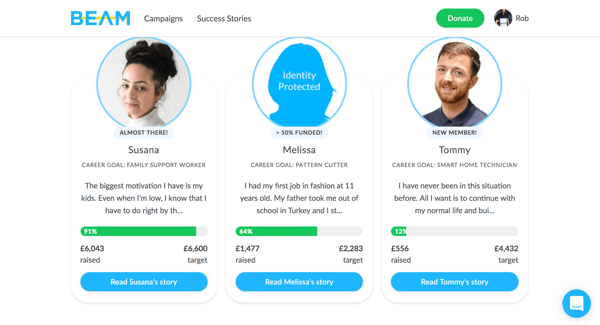 When I asked Alex why he decided to start this new and potentially revolutionary venture, his response was simply, “I was tired of walking past the same people and feeling like I wasn’t doing anything to help”.

What’s great about the platform is it enables supporters to connect directly with the people they are backing. Once you make a donation you can send a message directly to the member wishing them well. The member can also choose to update donors with his/her progress via short messages.

In its first year, BEAM raised almost £180,000 through more than 2,000 different supporters and funded 45 people into work with 5 others in training (at the time of writing). They’ve also been recognised as the Winners of the best use of technology in homelessness, 2018 and the Overall Winner at the London Homeless Awards, 2018. 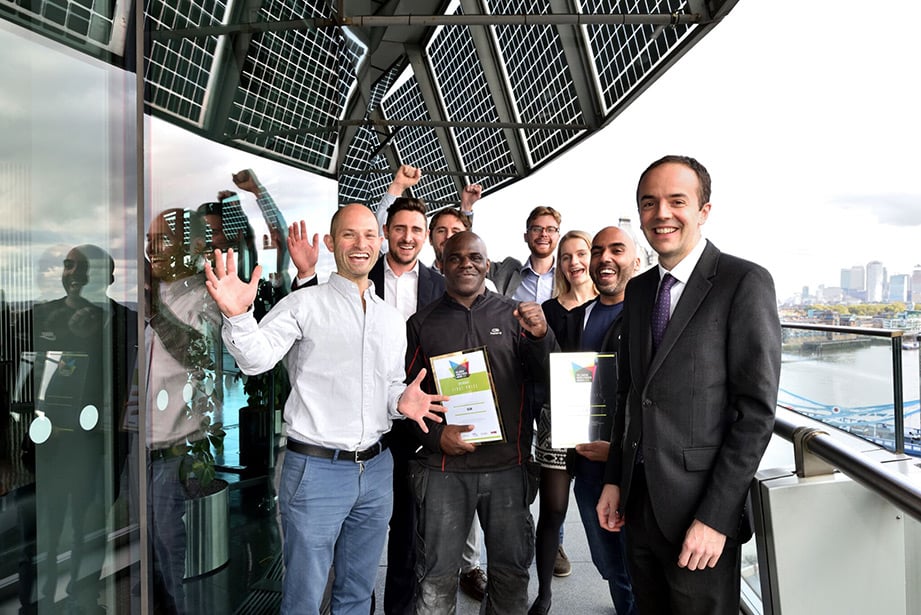 For me what’s so appealing is the simplicity. Like most good tech innovations, I find myself asking why this wasn’t around before (and kicking myself for not coming up with the idea).

Of course the tragic irony is that many of these challenges become easier to overcome if a person has a reliable income in a stable, fulfilling job. This, says Alex, is why BEAM has focused its efforts on high quality training and support which helps people into the career paths of their choice, because “...work is really the ultimate route to independence, and freedom, and it’s so important that everyone is given those opportunities to do work that they can thrive in.”

You can see our full interview with Alex from BEAM by following the link below. 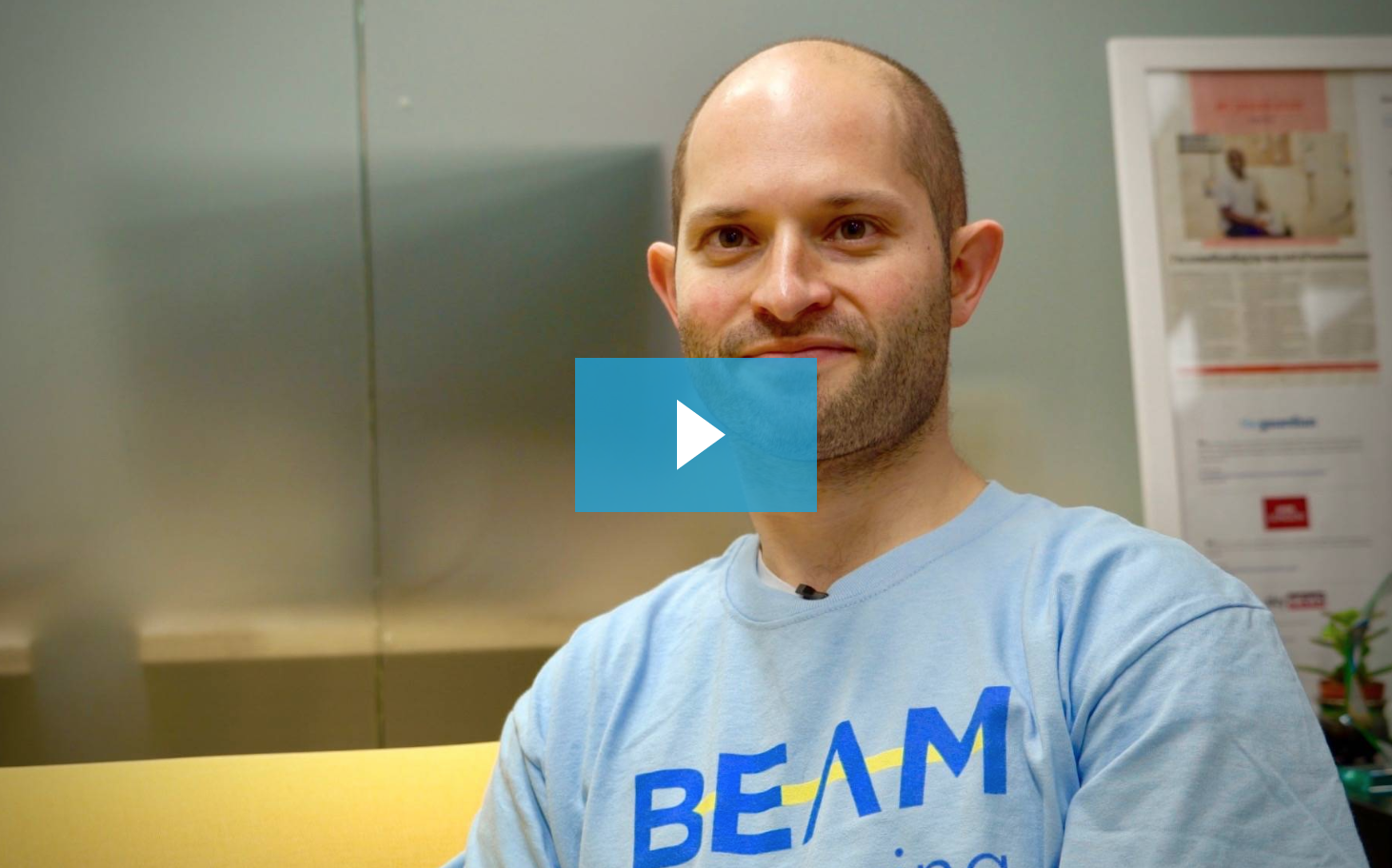