by Rob Marsh,
on 4 September 2019 about Exploitation Empowerment and Equality

Modern slavery is a term used to describe the in-humane treatment of vulnerable people through trafficking, forced-labour, debt-bondage or any other kind of exploitation. And it’s happening now all over the world. So what can we do about it? 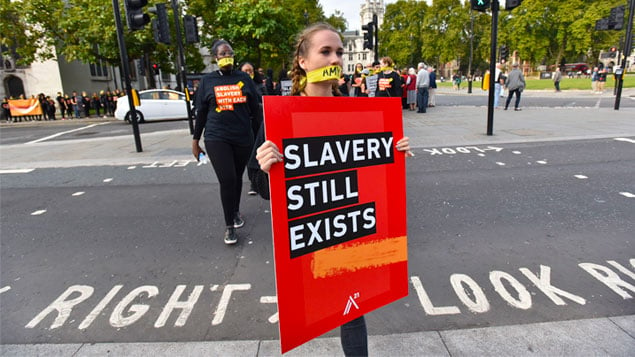 Although slavery has been criminalised in every recognised country, it is believed that there are roughly 40 million people living in modern slavery today, and most of them are women and children. Unsurprisingly, employers - alongside governments - have a huge role to play in addressing what for many seems like an impossible mountain to climb.

So, last week we hosted an event about Modern Slavery at Reward Gateway’s London HQ, to give RG’s teams, and a small number of external guests, an overview of this very current and often daunting topic, and explore the role that employers have to play in finding solutions.

We opened up the floor to three experts in the field who each looked at a specific aspect and action. Firstly, Joanna Ewart-James of Freedom United talked about people power and the importance in creating a vocalised, united front in the fight against modern slavery. Freedom United work with a huge number of partners to campaign for legislation change, human rights and global action to combat exploitation. If you’ve made it this far and want to take just one action today then please look through their campaigns and get your voice heard.

After Joanna we heard from Ian Pettigrew and Susan Bannister of Hope for Justice and the Slave Free Alliance. Ian gave us a short overview of Hope for Justice before talking about some of his own direct experience in meeting survivors, as well as being confronted with the grim reality of child exploitation and prostitution whilst visiting Ethiopia.

Susan followed by explaining some of Hope for Justice’s work on British soil, most notably their recent uncovering of a trafficking gang which deceived 400 people into coming to the UK under the pretence of “a better life”, and forced many of them into servitude.

Operation Fort saw 8 offenders jailed with prison sentences ranging from 3 to 11 years, and demonstrates the importance of charities like Hope for Justice in bringing accountability to those who are guilty of committing such heinous crimes.

Susan finished by talking us through some of the practical things that we as individuals, professionals and employers can do to join the fight against modern slavery. Here are some of her key points for anyone that wants to take action but doesn’t know where to start:

Yes this is a complex issue, and yes it is a global one, but there are ways to break down the complexities and focus your efforts. A good place to start is to understand what’s happening in your own country and locality.

In the UK for example the Modern Slavery Act was passed in 2015 and is the first piece of legislation which focuses on the prevention and prosecution of modern slavery, along with the protection of victims. It also includes provisions designed to increase the transparency in supply chains of businesses, although many would argue that it doesn’t yet go far enough.

It also may be helpful to understand some of the key warning signs in spotting somebody who is being exploited. Unfortunately, modern slavery exists in the world around us and in broad daylight. The Gangmasters and Labour Abuse Authority (GLAA) has listed out some of the signs to watch out for and has a dedicated phone number for reporting problems across the UK.

Other tools to understand the global issue include Thomson Reuters Foundation's newly created Stop-Slavery Hub for a huge amount of information and articles created by dedicated journalists from around the world. And the Global Slavery Index from the Walk Free Foundation for some up-to-date and frankly shocking global data.

#2: Use your voice and Speak Up

hey don’t have any”

Okay, I nabbed that quote from Joanna’s presentation, but it’s absolutely true. When issues are this big and this complex they require us to come together. And when we unite as a people against a common cause then anything is possible. You could get involved with organisations like Freedom United and join more than 2,000,000 people who like you think that slavery is not okay. 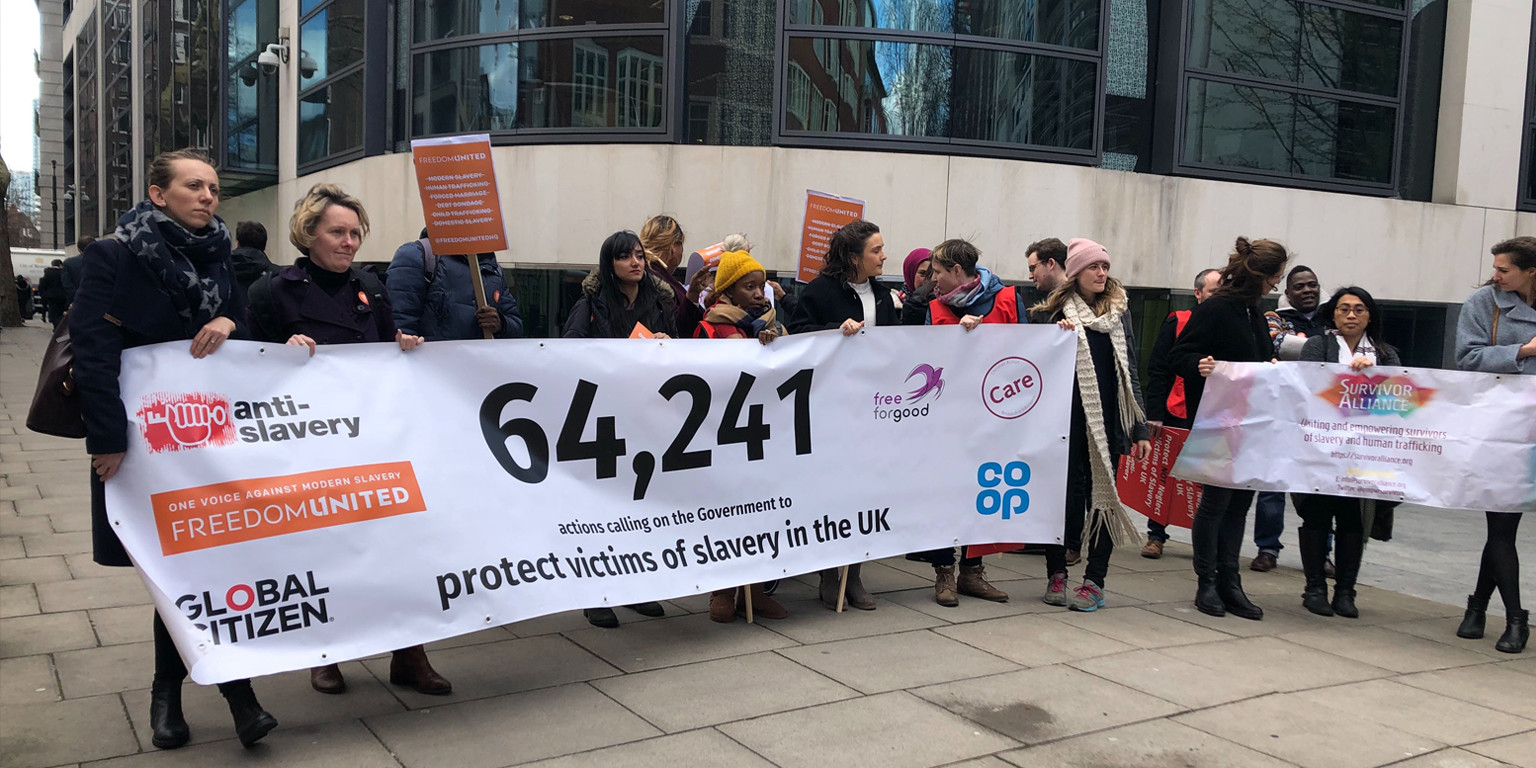 You can take that a step further by sharing campaigns with your own social network and having conversations with your immediate friends and family. I know I’ve had a few heated debates with my folks over the occasional Sunday roast.

Once you start talking about this topic you’ll be surprised at how many other people have been thinking the same things as you, and if they disagree, then it's a perfect opportunity for you to hone those razor sharp debating skills. Just be prepared to lose a few friends along the way. Let's face it though, they weren’t really close friends anyway.

It’s time for you to go all Holmes and Watson and get curious. Again, start locally and ask questions at your local council, place of work and if you run a business, then it may be time to look at your own processes.

This is potentially when things get a bit uncomfortable as sometimes the truth hurts and it's difficult to hold up the mirror with absolute integrity and honesty. But a huge cause of slavery is a lack of transparency, so until we start being truly honest with ourselves it’s likely that nothing will change.

Susan made some suggestions for employers which I found interesting and certainly had a few of our HR colleagues in the room furiously scribbling in their notepads:

The Slave-Free Alliance are experts at helping organisations to address exploitation within their midst. But, in order for them and organisations like them, to be able to identify situations where they can help it takes a courageous effort from people willing to start that conversation.

#4: Support organisations on the front line

Like any other cause that becomes important to you, one of the biggest things you can do is get behind the people who have been fighting this battle for a while. They’re the ones with the experience and the network to make an impact on your behalf.

In the fight against Modern Slavery there are a plethora of organisations to choose from. Whether you decide to support an organisation who are providing different types of recovery and integration programmes like Helen Bamber Foundation in the UK, or whether you'd like to donate to an organisation who are focussed on ending slavery altogether like anti-slavery.org it all makes a difference to the overall cause. 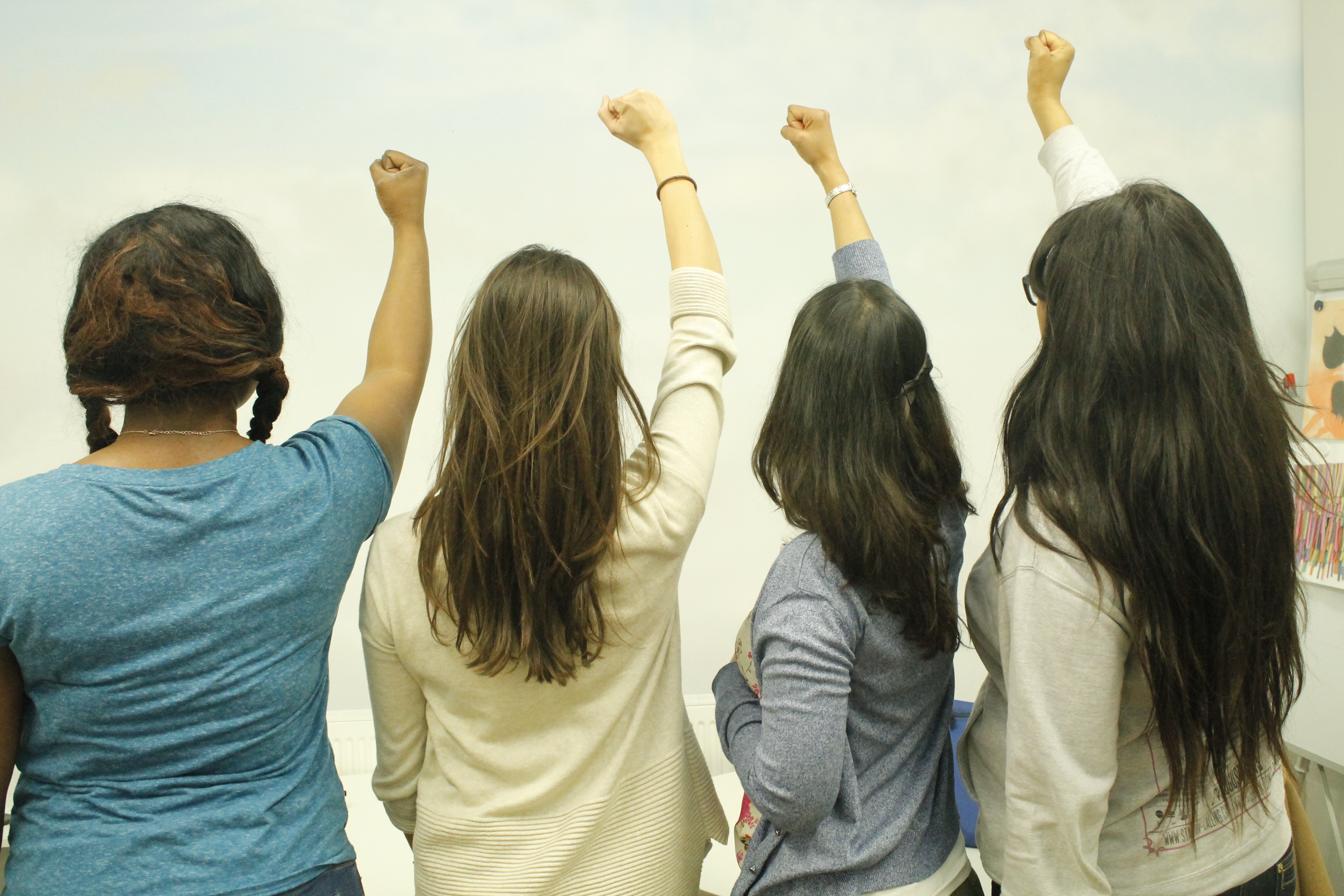 When choosing the right organisation, it's important to do your research first and ensure that anyone you support has their beneficiaries best interests at heart.

You could even go a little bit further and organise your own fundraiser and/or donate some of your own skills. A friend of mine is about to embark on a trip to Addis Ababa in Ethiopia with Hope For Justice and #HRConnect where she’ll be working with a number of other HR and L&D professionals by providing management and team training for the volunteers in Hope for Justice’s network.

She’s putting her skills to use and the money that she and her team have raised in the build up will go directly to Hope for Justice’s work preventing exploitation, rescuing victims, restoring lives and reforming society. You can find out more about the project here and check out this short clip from HFJ to learn more about their impact.

#5: Vote with your wallet

This final suggestion is one I’m pretty passionate about. If we’re ever to see changes in the way that some of the brands we love treat the people who make their products then we can send a message by choosing not to buy into them. If cash is king then let’s use our money to support businesses and organisations who are progressive in their attempts to treat everyone in their supply chain with dignity and respect.

Now, I appreciate that this isn’t always easy and as someone who runs a small clothing brand I also appreciate how complex and messy supply chains can be. But, that doesn’t mean we can’t try, and it also doesn’t mean that brands shouldn’t take responsibility for their actions.

A couple of resources that I’ve come across that can help with buying decisions are The Good Shopping Guide for comparisons and ratings of high street brands, and Pebble Magazine for sustainable design, ethical fashion, slow food or eco-travel.

The good news is that there really is so much choice available in the “ethical” space that you’re no longer limited to starchy hemp shirts or tasteless vegan salads. In fact, there’s been so much growth here that the first vegan investment fund is about to hit the New York Stock exchange. How about that for progress?

Like most things, deciding to take a stand and make a start might be the most difficult thing here. Often with such big and sensitive subjects we as individuals can feel powerless at the same time as not wanting to put a foot wrong. But there is already a huge movement out there standing up to be counted on this issue. Why not look into it for yourself and make a start, and together we can make real history happen and perhaps end slavery for good.